How Is Laughter The Best Medicine? 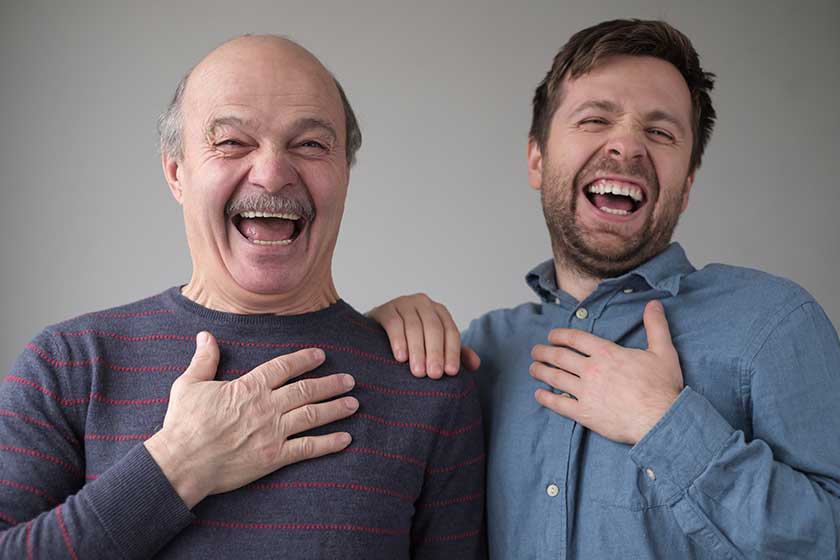 Laughter comes from a natural urge everyone gets when they hear a joke. Even though it may seem like fun only for the moment, there are several long-term benefits one can enjoy from laughing. Many people hesitate to share jokes with aging adults as a sign of respect or reverence, but that shouldn’t be. Aging adults tend to benefit more when they laugh so be sure to make your elderly loved ones laugh today. Here’s why.

Everyone goes through stress at one point or the other, which is natural. However, long-term stress can result in physical and mental health problems, especially for aging adults. One of the quickest and most fun ways to relieve stress is laughter. When you laugh, endorphins are released to the brain. Endorphins are happy chemicals that are released to the brain and can effectively reduce stress levels and physical pains quickly. While the release of this chemical to the brain can be achieved through physical activities such as yoga, laughter is another effective way to boost the release of endorphins to the brain.

Boosts Connection and Bonding with Others

Many aging adults often experience isolation and loneliness after retirement, which is why moving into a retirement community is a good option for retirees to have the opportunity to communicate more. Laughter is a good way to bond with other people and can be precious to adults who are already experiencing isolation and loneliness. Laughing at the same jokes as others can also help them feel a sense of being part of a community.

Too much stress can cause a drastic rise in blood pressure levels and that can be very dangerous, especially for aging adults. Since laughter boosts the release of endorphins to the brain—which can help to reduce stress levels quickly—there will also be a reduction in blood pressure.

As aging retirees transition to several seasons of their lives, they are likely to develop feelings of loneliness and depression which can lead to mental and physical problems. The release of endorphins to the brain that happens when you laugh can help to reduce the feelings of depression. Laughter therapy is often recommended for anyone struggling with depression or any other mental or emotional concern.

Improves the Memory and Cognitive Health

Many aging adults start to become forgetful as their cognitive health starts to decline. Memory care is a growing care option for adults who have been diagnosed with dementia and other cognitive problems. Stress is a leading cause of cognitive problems, as it affects the brain greatly. When the body is stressed, it produces cortisol, which can reduce memory function. Laughter can help to reduce the release of cortisol to the brain and helps the brain repairs itself faster. Therefore, laughter is an excellent way for aging adults to improve their memory and cognitive health.

Telling Your Aging Parent About The Risks Of Falling & How Senior Assisted Living Can Prevent It
December 21, 2022

Memory Care Communities In Lakeside, VA: How To Carefully Select One For Your Aging Parent
December 18, 2022
Community Locations
Go to Top
Reveal Pricing
Schedule a Tour
Contact Us